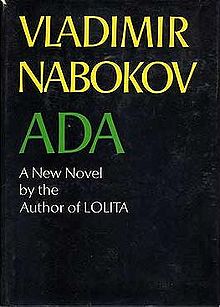 [Note: The page numbers correspond to the 1969 McGraw-Hill edition; however, Brian Boyd informed me on the NABOKV-L listserve that the 1969 edition is "misprint-strewn"; therefore, the book version of this blog will be referencing the Vintage edition.]

In terms of Dr. Krolik, Boyd annotated on ADAOnline in the afternote to chapter 8 of part 1: "The first caterpillar mentioned as his contribution to her larvarium is a Nymphalis carmen, in allusion to Lolita and the disparity between Humbert’s age and Lolita’s, as between Krolik’s and Ada’s (she is only fourteen when Krolik dies)." And in a May 20, 2016 post on the NABOKV-L listserve, Alexey Sklyarenko shared "In the summer of 1888, when Ada (b. July 21, 1872) is sixteen, Percy de Prey [...] is twenty-one and Phillip Rack is about thirty.

"In addition to Ada's age-gap affairs, Ada's 626 pages are peppered with hebephilia\ephebophilia:

1. Van's maternal grandmother Daria ("Dolly") Durmanov was the daughter of Prince Peter Zemski [...] Dolly, an only child, born in Bras, married in 1840, at the tender and wayward age of fifteen, General Ivan Durmanov, Commander of Yukon Fortress and peaceful country gentleman [...] (3)

3. Ada and Van returned to the ground floor—this time all the way down the sumptuous staircase. Of the many ancestors along the wall, she pointed out her favorite, old Prince Vseslav Zemski (1699-1797, friend of Linnaeus and author of Flora Ladorica, who was portrayed in rich oil holding his barely pubescent bride and her blond doll in his satin lap. (46)

In addition, the Prince’s son, Peter Zemski, married Mary O’Reilly. Boyd wrote that “John Rea [NABOKV-L, 30 November 2004] suggests that Mary O’Reilly may also echo Mary Louise O’Murphy (or Marie-Louise or Louison Morfy or O’Morphy, 1737-1814), who became mistress to Louis XVI of France [...]. She is said both to have been [Giacomo] Casanova’s mistress first, or to have been noticed by him, and to have been at fifteen the model for [François] Boucher’s famous painting, Girl Reclining [...]”

Casanova shared in Histoire de ma vie that upon seeing thirteen-year-old O’Murphy in the nude, that he found her so beautiful that he commissioned a nude portrait of the nymphet.

It’s not clear how King Louis XV discovered O’Murphy. One theory is that he saw Casanova's commission and requested to see the original, and another theory is that she was recruited by Madame de Pompadour, the king’s official chief mistress. Subsequently, King Louis XV impregnated O’Murphy. However, she had a miscarriage at fifteen but gave birth at sixteen to the king’s illegitimate child.

4. Two other phenomena that she [Ada] had observed even earlier proved ridiculously misleading. She must have been about nine when that elderly gentleman, an eminent painter whom she could not and would not name, came several times to dinner at Ardis Hall [...] the celebrated old rascal who drew his diminutive nudes in-variably from behind—fig-picking, peach-buttocked nymphets straining upward, or else rock-climbing girl scouts in bursting shorts—"I know exactly," interrupted Van angrily, "whom you mean, and would like to place on record that even if his delicious talent is in disfavor today, Paul J. Gigment [AKA Nymphobottomus] had every right to paint schoolgirls and poolgirls from any side he pleased.Proceed." (117)

Boyd wrote in Nabokov's Ada The Place of Consciousness that prior to Ada's affair with Van, "[t]he closet she had come to "sexual contact" was with an elderly gentleman [Paul J. Gigment], a distinguished painter [...]

5. An American, a certain Ivan Ivanov of Yukonsk, described as an "habitually intoxicated laborer" ("a good definition," said Ada lightly, "of the true artist"), managed somehow to impregnate—in his sleep, it was claimed by him and his huge family — his five-year-old great-granddaughter, Maria Ivanov, and, then, five years later, also got Maria's daughter, Daria, with child, in another fit of somnolence. (142)

Boyd related in his annotations:

In England, from the 1880s, the term incest “began to be used primarily to mean sexual relations between close kin, and particularly between fathers and daughters, or brothers and sisters. . . . Reformers now pointed to a more specific and sensitive problem: the sexual abuse of girls in the congested family quarters of the large cities. When Beatrice Webb worked in a sweatshop in 1888, she was shocked to find talk of incest commonplace (perhaps missing the irony of her fellow workers). In her diary she describes a seamstress muttering to her that the girls at the next table were a bad lot. ‘Why bless you, that young woman just behind us has had three babies by her father, and another here has had one by her brother.’ . . . In 1906 an internal Home Office memo summed up the official view in blunt terms: ‘Incest is very common among the working classes in the big towns’

The whole passage echoes Humbert’s fantasy that “with patience and luck I might have her [Lolita] produce eventually a nymphet with my blood in her exquisite veins, a Lolita the Second, who would be eight or nine around 1960, when I would still be dans la force de l’âge; indeed, the telescopy of my mind, or un-mind, was strong enough to distinguish in the remoteness of time a vieillard encore vert—or was it green rot?—bizarre, tender, salivating Dr. Humbert, practicing on supremely lovely Lolita the Third the art of being a granddad.

Life imitates Nabokov’s art. In 2009, it came to light the case of the billionaire Antonio Luciano, in Minas Gerais, Brazil, who bought virgins from poor parents to deflower them. He had more than twenty children out of wedlock, two of them later to become his lovers, as also the children they bore incestuously.

6. [...] trifles as tape recorders, the favorite toys of his and Ada's grandsires (Prince Zemski had one for every bed of his harem of schoolgirls) were not manufactured any more, except in Tartary where they had evolved "minirechi" ("talking minarets") of a secret make. (157)

Boyd wrote in his annotations that this may remind one of Lolita’s Humbert Humbert who said, “Idiot, triple idiot! I could have filmed her! I would have had her now with me, before my eyes, in the projection room of my pain and despair!”.

8. In his London studio her husband, an unbalanced, unsuccessful painter (ten years older than his father-in-law whom he envied and despised) shot himself upon receiving the news by cablegram from a village in Normandy called, dreadfully, Deuil. (368)

10. Van's sexual dreams are embarrassing to describe in a family chronicle [...] Aqua impersonating Marina or Marina made-up to look like Aqua, arrives to inform Van, joyfully, that Ada has just been delivered of a girl-child whom he is about to know carnally on a hard garden bench while under a nearby pine [...] (383-384)

11. Its new expression in regard to Ada looked sufficiently fervid to make watchful fools suspect that old Demon "slept with his niece" (actually, he was getting more and more occupied with Spanish girls who were getting more and more youthful every year until by the end of the century, when he was sixty, with hair dyed a mid-night blue, his flame had become a difficult nymphet of ten). (415)

12. Thus had Mlle Larivière's Enfants Maudits (1887) finally degenerated! She had had two adolescents, in a French castle, poison their widowed mother who had seduced a young neighbor, the lover of one of her twins. (449)

14. The hag demanded certain fantastic sums—which Demon, she said, had not had time to pay, for ‘popping the hymen’—whereupon I had one of our strongest boys throw out vsyu (the entire) kompaniyu.” “Extraordinary,” said Van, “they had been growing younger and younger—I mean the girls, not the strong silent boys. His old Rosalind had a ten-year-old niece, a primed chickabiddy. Soon he would have been poaching them from the hatching chamber.” (555)

15. [...] left a message for Van, who got it only late at night when he returned from a trip to Sorcière,in the Valais, about one hundred miles east, where he bought a villa for himself et ma cousine, and had supper with the former owner, a banker’s widow, amiable Mme Scarlet and her blond, pimply but pretty, daughter Eveline, both of whom seemed erotically moved by the rapidity of the deal. (560)

16. The most hazardous moment was when he and she moved to another villa, with a new staff and new neighbors, and his senses would be exposed in icy, fantastic detail, to the gipsy girl poaching peaches or the laundry woman’s bold daughter [...] Yet he knew that by daring to satisfy the corresponding desire for a young wench he risked wrecking his life with Ada. (610)