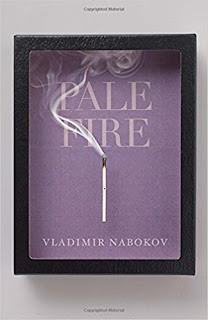 1. “Otar, a pleasant and cultured adeling with a tremendous nose and sparse hair, [who] had his two mistresses with him, eighteen-year-old Fifalda (whom he later married) and seventeen-year-old Fleur”. (105)

2. Kinbote narrates how Griff, a farmer, summoned Garh, his young daughter, to be the King’s escape guide:

A rude staircase led up to a loft. The farmer placed his gnarled hand on the gnarled balustrade and directed toward the upper darkness a guttural call: “Garh! Garh!” Although given to both sexes, the name is, strictly speaking, a masculine one, and the King expected to see emerge from the loft a bare-kneed mountain lad like a tawny angel. Instead there appeared a disheveled young hussy wearing only a man’s shirt that came down to her pink shins and an oversized pair of brogues. A moment later, as in a transformation act, she reappeared, her yellow hair still hanging lank and loose, but the dirty shirt replaced by a dirty pullover, and her legs sheathed in corduroy pants. She was told to conduct the stranger to a spot from which he could easily reach the pass. A sleepy and sullen expression blurred whatever appeal her snub-nosed round face might have had for the local shepherds; but she complied readily enough with her father’s wish. His wife was crooning an ancient song as she busied herself with pot and pan. (141)

He sank down on the grass near a patch of matted elfin-wood and inhaled the bright air. The panting dog lay down at his feet. Garh smiled for the first time. Zemblan mountain girls are as a rule mere mechanisms of haphazard lust, and Garh was no exception. As soon as she had settled beside him, she bent over and pulled over and off her tousled head the thick gray sweater, revealing her naked back and blanc-mangé breasts, and flooded her embarrassed companion with all the acridity of ungroomed womanhood. She was about to proceed with her stripping but he stopped her with a gesture and got up. He thanked her for all her kindness. He patted the innocent dog; and without turning once, with a springy step, the King started to walk up the turfy incline. (142)

3.  On Griff’s mantelpiece was: "a color print representing an elegant guardsman with his bare-shouldered wife—Karl the Beloved, as he was twenty odd years before, and his young queen, an angry young virgin with coal-black hair and ice-blue eyes.” (141)