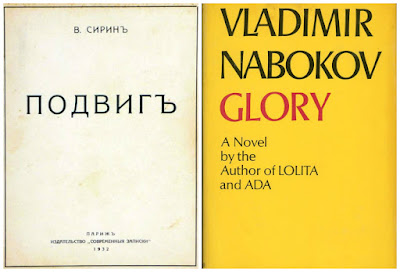 Glory is the wryly ironic story of Martin Edelweiss, a twenty-two-year-old Russian émigré of no account, who is in love with a girl who refuses to marry him. Convinced that his life is about to be wasted and hoping to impress his love, he embarks on a "perilous, daredevil project"--an illegal attempt to re-enter the Soviet Union, from which he and his mother had fled in 1919. He succeeds--but at a terrible cost.

1. The very first sentence reveals that after Martin’s grandfather, “a robust Swiss with a fluffy mustache”, immigrated to Russia, he got a job as a tutor and married his youngest tutee. (1)

2. A “despondent” middle-aged ship passenger said in reference to Alla, a twenty-five-year-old poetess, “not bad, that broad”. Alla married at eighteen but didn’t remain faithful to her husband for more than two years. (29) “A Grand Duc languished because of her; [and] Rasputin pestered her for a month with telephone calls.” (30) But, despite the age-gap between Alla and her suiters, she’s not a nymphet; however, she gave Martin a copy of “[…] Pierre Louÿs’s  Les Chansons de Bilitis in the cheap edition illustrated with the naked forms of adolescents, from which she would read to him, meaningfully pronouncing the French […]” (30) 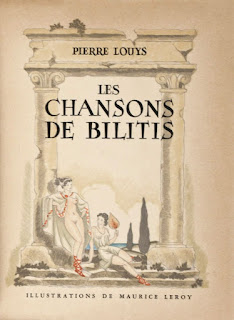 The storm had lasted all night. Selenis of the lovely hair had come to spin with me. She stayed for fear of the mud, and, pressed tightly each to each, we filled my tiny bed.

When young girls sleep together sleep itself remains outside the door, "Bilitis, tell me, tell me whom you love." She slipped her thigh across my own to warm me sweetly.

And she whispered into my mouth: "I know, Bilitis, whom you love. Close your eyes, I am Lykas." I answered, touching her, "Can't I tell that your are just a girl? Your joke's a clumsy one."

But she went on: "Truly I am Lykas if you close your lids. Here are his arms, here are his hands" ... and tenderly, in the silence, she flushed my dreaming with a stranger dream.

3. In the mornings, Marie, the niece of the old chambermaid, would come to help with the household chores. She was seventeen, very quiet and comely with cheeks of a dark-pink hue and yellow pigtails tightly wound about her head. Sometimes, while Martin would be in the garden, she would throw open an upstairs window, shake out her dustcloth, and remain motionless, gazing [...] Martin would go up to the bedrooms, determine from the drafts where the cleaning was going on, and would find Marie kneeling in meditation amidst the gloss of wet floorboards; he would see her from behind, with her black wool stockings and her green polka-dot dress. She never looked at Martin, except once—and what an event that was![...]He resolutely vowed to start a conversation with her, and to give her a furtive hug. (45-46) 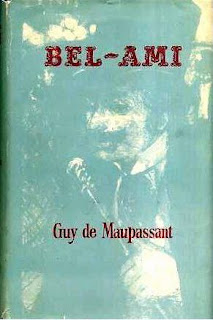 4. On evening after dinner, Martin sat in the drawing room with the piazza's door open while candles burned in the chandeliers and read "a small volume" of Guy De Maupassant's Bel Ami.(48)

Bel Ami is about Georges Duroy, a journalist, who seduces women and a nymphet to obtain an influential position in Paris. For example, he convinces Susan, the young daughter of the owner and chief editor of the Vie Francaise, to inform her parents that she desires to marry Duroy.


"If the little girl had a little courage, he was going to succeed at last. For three months he had been enveloping her in the irresistible net of his love. He was seducing, captivating, conquering her. He had made himself loved by her, as he knew how to make himself loved. He had captured her childish soul without difficulty." (434)

5. Martin met a prostitute: “A girl under an umbrella […]” After they entered a dark taxicab: “She covered her face with her hands, giggling”. And before they began their transaction, Martin “[…] gazed lovingly at her bare, childish shoulders and blond bob […]” (55) Nabokov doesn’t reveal the prostitute’s age, but the fact that she was referred to as a “girl”, she “giggled” and had “childish shoulders” is revealing.

6. During the civil war, in Southern Russia, Irina, then a quiet, plump, normal though melancholy girl of fourteen, was on a train with her mother: they had had to be content with a bench in a freight car crammed with all sorts of riffraff, and during the long journey two rowdies, ignoring the protests of some of their pals, palpated, pinched, and tickled the child, saying monstrous obscenities to her. Mrs. Pavlov, wearing the smile of helpless horror, and doing her best to protect her, kept repeating, “Never mind, Irochka, never mind—oh please leave the child alone, you should be ashamed of yourselves—never mind, Irochka——” (149-150)

7. After Martin checked his bag and purchased a ticket for the evening train, he got a seat in the station’s café where he ate fried eggs and read a “vicious review of Bubnnov’s lastest book Caravella.” After he ate and lit a cigarette, he noticed “[a] young girl at the nearest table [who] sat writing, and wiping her tears. She looked at him for an instant with dim wet eyes, pressing her pencil against her lips, and, having found the word she sought, scribbled again, holding her pencil the way children do […] He paid for his meal and, planning to follow her, began waiting for her to get up […] She remained sitting for a long time while somewhere beyond the windowpanes trains were leaving, and Martin, who had to get to the Latvian consulate before closing time, decided to give her just five minutes more, and go. The five minutes passed. “All I would do would be to ask her to meet me for a drink in the afternoon—only that,” […] Another minute passed. “All right, forget it,” said Martin, and, throwing his raincoat over his shoulder in the English manner, made for the exit.

8. While seated in a leather armchair in a hotel’s lobby, Martin noticed “two mulatto girls with unusually thing legs”. Suddenly, Darwin, “with throaty ejaculations, slapped” Martin on the shoulder. “You scoundrel,” mumbled Martin happily, “you scoundrel, I’ve been looking for you since morning.” Martin and Darwin didn’t discuss the girls because they “[…] felt embarrassed and could not find a subject of conversation; [but] they kept poking each other, grinning and rumbling.” (197)