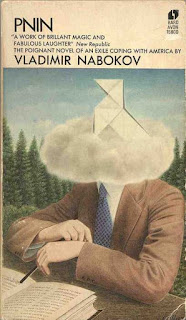 Charles Poore, his in New York Times review of Pnin, summarized the book by writing:

The central character is our old friend, the absentminded professor […] an émigré of the old Russian school. He is tremendously proud of his American citizenship, enchanted with the glittering gadgetry of our culture, lonely, loquacious and heroic. He teaches classic Russian literature at Waindell […] After ten years among the cliques and cards at Waindell, Pnin has a heady feeling that he has finally achieved security of sorts. His genially acerb colleagues lampoon him mercilessly, but he finds in their own folklore grounds for a measure of hilarity. Naturally, he looks mainly to the past for the substance of his stature as a man of learning. Yet each time he changes his place of residence he acquires new insights to the ways of the not quite inscrutable New World.

1. In Phantom of Fact: A Guide to Nabokov’s Pnin, Gennadi Barabtarlo noted at least three references to Ivan Bunin in Pnin. For example, while Pnin was waiting to give a lecture:

“In the middle of the front row of seats he saw one of his Baltic aunts, wearing the pearls and the lace and the blond wig she had worn at all the performances given by the great ham actor Khodotov […]” (27) Barabtarlo wrote: “The wry phrase “the great ham actor” can be traced back to Ivan Bunin’s The Life of Arsen’ev (1930) […]” ( 85)

Vladimir Vladimirovich, Pnin’s narrator, related that Bunin could be found “swarming all over” The Pines with other Russian “[…] liberals and intellectuals who had left Russia around 1920 […]”. (117) And Vladimirovich related that Konstatin Ivanich shared a villa in Grasses, southern France, “with several other Russian expatriates.” (125) Barabtarlo wrote: “Ivan Bunin, who lived in Grasse in the twenties and thirties, was one of them.” (206) 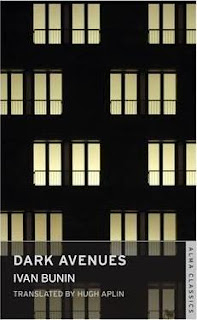 While Nabokov and Bunin eventually fell out of favor and Bunin’s Dark Avenues was driven, according to Shrayer, by a desire to reclaim his status over Nabokov as the foremost Russian writer (394), it’s worth taking a stroll through Dark Avenues.

According Alma Classics, Dark Avenues, if not the most read, is one of the most read volumes of short stories in Russia. And in a blurb, Nabokov said of Bunin in reference to Dark Avenues”: “A most powerful ‘connoisseur of colours’. One could write an entire dissertation of his colour schemes.”

Here is the opening of Bunin's “Tanya”:

“She was working as a housemaid in the house of his relation Madame Kazakov, who owned a small estate. She was just seventeen years old; her tiny figure was especially noticeable when she walked barefoot, her skirt swaying gently from side to side and her little breasts moving under her blouse […] her simple little face could be called pleasing, and her grey peasant eyes had no beauty other than that of youth.” (97) And Tanya, an orphan, was described as a “half-childish girl” with an “intoxicating scent of something rural and virginal”. (99)

Petrusha, on his way back to Moscow, had stopped to visit Kazakova in the country. In the middle of the night “He lit a match and caught sight of her asleep. She was lying on her back on a wooden bed, in a blouse and cotton skirt - her little breasts showed roundness through her blouse, her legs were bare to the knees[...] The match went out. He stood there – and gently approached the bed [...]” (99)

“He moved her legs apart in their tender warmth [...]” “[...] and he began to kiss her neck, her breast, inhaling that intoxicating scent of something rural and virginal. And she, through her tears, suddenly gave a spontaneous feminine response – strongly, and it seemed gratefully, embracing him and pressing his head to her breast.” (100)

After subsequent sexual conquests with the nymphet, to Tanya's utter dismay, Petrusha left the country never to visit again.

“Tanya” is just one of a number of short stories in Dark Avenues that contains nympholepsy.

2. There is no clear indication that Pnin was an acting ephebophile: “Like so many aging college people, Pnin had long ceased to notice the existence of students on campus […] except for a girl’s comely nape here and there, he saw nobody in the Reading Room.” (61) But that didn’t stop Avon Books from publishing Pnin (1957) with Pnin on the cover, a phallic cane in one hand and his portful’ in the other, ogling three college coeds.

3. While Pnin was inspecting the house where he would rent a room, he “peered” into Isabel’s room, the daughter of the homeowners, and “inspected Hoecker’s “Girl with a Cat” above the bed, and Hunt’s “The Belated Kid” above the bookshelf.” (34)

Eric Naiman wrote in Nabokov, Perversely that Hoecker's “Girl with a Cat” may have been a reference to Balthus' "Jeune Fille au Chat", which is one of Balthus’ most controversial paintings out of many of his revealing paintings and Polaroids of nymphets. In the oil on wood, a nymphet is reclining with her hands behind her head with her left foot resting on the chair, which causes her panties to be exposed below her schoolgirl skirt.


William Morris Hunt’s “The Belated Kid” is on view in the Penny and Jeff Vinik Gallery in the Museum of Fine Arts, Boston. Here’s a summary of the description of the painting from the museum’s website:

Hunt began this monumental image of a peasant girl and her rescued kid about 1854 […] It proved so popular when exhibited in the United States that Boston collector Peter Chardon Brooks […] commissioned a replica.

The painting clearly was inspired by Millet’s pictures of peasant children [17.1484], especially those depicting young girls diligently watching over one or two cows or sheep. In Hunt’s version of the subject, a kid that strayed and was found again is carried home by a pretty barefoot shepherdess […] While Hunt’s image echoes Millet’s images of rural labor, it is considerably more romantic in its presentation of the innocence and goodness of these hardworking peasant children.

And who was one of Nabokov's favorite painters? Based on my leading question, you may have been able to guess that it is none other than Balthasar Klossowski de Rola or simply Balthus. Nabokov shared in Strong Opinions, "The aspects of Picasso that I emphatically dislike are the sloppy products of his old age. I also loathe old Matisse. A contemporary artist I do admire very much, though not only because he paints Lolita-like creatures, is Balthus." (167) And Balthus said, translated into English, in the documentary Balthus the Painter (1996), referring to Nabokov, “I think we feel the same thing in the presence of young girls.”

The first part of the program, three ancient movie shorts, bored our friend: that cane, that bowler, that white face, those black, arched eyebrows, those twitchy nostrils meant nothing to him. Whether the incomparable comedian danced in the sun with chapleted nymphs near a waiting cactus, or was a prehistoric man (the supple cane now a supple club), or was glared at by burly Mack Swain at a hectic night club, old-fashioned, humorless Pnin remained indifferent. “Clown,” he snorted to himself. “Even Glupishkin and Max Linder used to be more comical.” (80)

I would imagine that most readers immediately noticed the allusion to Charlie Chaplin. Specifically, Barabtarlo noted that the passage is alluding to Chapin’s Sunnyside (1919), His Prehsitoric Past (1914), and Caught in a Cabaret (1914). And Barabtarlo related: “In an interview with Alfred Appel, Nabokov admitted that he, unlike Pnin, “enjoyed tremendously American comedy – Buster Keaton, Harold Lloyd, and Chaplin.” (142)

I related in The Allure of Nymphets: From Emperor Augustus to Woody Allen, A Study of Man's Fascination with Very Young Women that Charlie Chaplin confessed that he had a violent crush on a specific nymphet and generally loved young girls. And that Joyce Milton shared in her book, Tramp: The Life of Charlie Chaplin, that Chaplin acknowledged, “I had a violent crush on a girl only ten or twelve. I have always been in love with young girls [...]” (23)

And author and ephebophile J.D. Salinger was livid after Chaplin married Oona O'Neill. Salinger and O'Neill began an affair when O'Neill was sixteen-years-old, but after Salinger joined the Army, eighteen-year-old O'Neill moved to Los Angeles and married fifty-five-year-old Chaplin. (54-55) 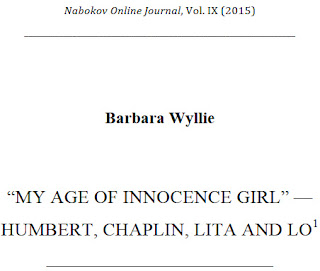 Interestingly, Barbara Wyllie wrote in "'My Age of Innocence Girl' - Humbert, Chaplin, Lita and Lo" about the influence that Chaplin had on Nabokov. For example, there's an additional reference to Chaplin's toothbrush mustache in Lolita and Chaplin appeared on a movie poster in Nabokov's short story “Easter Rain” (1925). (10)

In addition, Wyllie wrote that "[...] it could be argued that the particular nature of Chaplin’s incarnation in Lolita is linked to Nabokov’s 1928 poem, “Lilith,” via The Kid, Chaplin’s silent feature of 1921." (12) And that: “of his later novels – Luzhin's collapse in The Defense (1930), the surreal pantomine of Invitation to a Beheading (1938) […] Meanwhile, Chaplin's most famous on-screen persona steps into the worlds of The Gift, The Real Life of Sebastian Knight, and Pnin (1957).” (10)

In The Kid (1921), a nymphet in wings, played by Chaplin's twelve-year-old future wife Lillita McMurray, who wrote a tell-all book about the marriage, is told by Sin (i.e., The Devil) to "vamp" (i.e., seduce) the Tramp (Chaplin). The winged nymphet and the Tramp kissed before her Sweetheart arrived. She and her Sweetheart, who was played by a man who appeared to be a lot older than even thirty-two-year-old Chaplin, kissed before he allowed the nymphet and the Tramp to embrace and kiss again. However, after the nymphet refused to release her embrace of the Tramp, her Sweetheart became jealous and pummeled the Tramp.