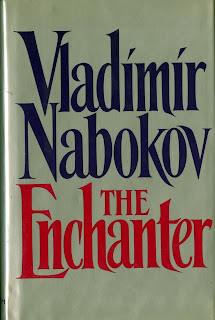 Plot Summary: Arthur, a middle-aged writer, is enticed by Maria, a twelve-year-old nymphet. Arthur strategically marries Maria’s ill mother and after the mother dies, Arthur takes his nymphet on a road trip where, to their utter dismay, he displays his phallus.

Nabokov wrote in a letter to Walter Minton, the president of G.P. Putnam’s Sons, that Volshebnik was “a kind of pre-Lolita novella [written] in the autumn of 1939 in Paris.” Nabokov thought the he had destroyed the novella, but he found it when he was "collecting material to give to the Library of Congress." (15)

The setting and time period isn't clear, but Nabokov mentioned in the author's notes that the protagonist “was a central European, the anonymous nymphet was French and the loci were Paris and Provence.” (12)

1. The forty-year-old protagonist was picky about his nymphets. He wasn't attracted to school girls who were husky, skinny, had acne or wore glasses. (23) He was attracted to "[a] violet-clad girl of twelve [...] [with] russet curls (recently trimmed) [...] large, slightly vacuous [light gray] eyes [...] warm complexion [...] pink mouth [...] [and] summery tint" (27) whom he noticed while he sat on a Paris park bench.

2. Subsequently, using the seduction technique of stalking that Soren Kierkegaard exemplified in The Seducer’s Diary, "[t]he day after, and the days that followed, he sat in the same place" (33) to be near the nymphet whom he "would have given a sack of rubies, a bucket of blood, anything he was asked" (37) to be with.

3. When the nymphet's mother demanded, "Off the bed! What's the meaning of this?" Hurriedly concealing the soft skin of her underside and the tiny wedge of her taut panties, she rolled off (oh, the liberties I would allow her! he thought). (37-38)

4. Interestingly, Nabokov wrote then when the nymphet gave a "vigorous toss" to "her brown curls", she was displaying “flirtatiousness” (51), which is what professional pickup artists would consider to be an Indicator of Interest (IOI).

5. But that wasn't the only IOI that the protagonist received. The nubile maiden "in front of everyone, touched his shaven cheek with her cool, unhurried lips: once over the champagne glass to congratulate him [upon becoming her step-father], and then at the door, as she was saying good-bye." And as he was “arranging his things in her former room where, in a bottom drawer, he found a little rag of hers that told him far more than those two incomplete kisses.” (54)