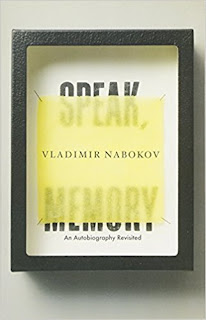 Antoinette’s mother, Elisabeth née Fischer (born 1760), was the daughter of Regina born Hartung (1732–1805), daughter of Johann Heinrich Hartung (1699–1765), head of a well-known publishing house in Königsberg. Elisabeth was a celebrated beauty. After divorcing her first husband, Justizrat Graun, the composer’s son, in 1795, she married the minor poet Christian August von Stägemann, and was the “motherly friend,” as my German source puts it, of a much better-known writer, Heinrich von Kleist (1777–1811), who, at thirty-three, had fallen passionately in love with her twelve-year-old daughter Hedwig Marie (later von Olfers). (54) 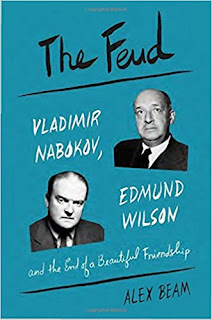 4. Alex Beam related in The Feud: Vladimir Nabokov, Edmund Wilson, and the End of a Beautiful Friendship that “Confession Sexuelle d’un Russe du Sud” was published in the appendix of volume six of Havelock Ellis’ Studies of Sexual Psychology and is deemed to be the authentic memoir of the narrator who was a “wealthy Ukrainian who lost his virginity at the age of twelve, having been seduced by girls his age and by older women.” Subsequently, after earning an engineering degree, the narrator is introduced to Italian nymphet prostitutes while on a business trip in Naples. 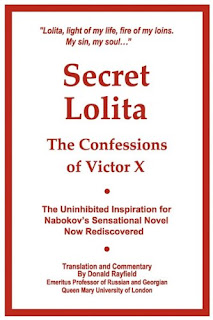 "Confession Sexuelle d'un Russe du Sud" was translated into Secret Lolita: The Confessions of Victor X by Donald Rayfield, an emeritus professor of Russian and Georgian at Queen Mary University of London. Here's a conservative excerpt that describes two of the Italian pre-teen prostitutes:

I was sent with some colleagues to Naples by my firm’s management, to look into the planned installation of an electrical factory, and plans for harnessing hydraulic power from the mountains around. I made my first visit there - the most pleasure-loving city of all Europe, not forgetting Munich, Paris and Berlin. One thing Naples is noted for is an enormous traffic in little boys and girls, and openly too. If you buy something in a shop, the shopkeeper, who may look quite respectable, will offer to show you a little girl of twelve, ten or eight. Pimps accost strangers in the street offering them little girls or little boys. Families who are not badly off and who have some standing - petty shopkeepers, clerks, tailors, cobblers ¾ also traffic in their prepubescent girls.

For the reasonable price of twenty, thirty, forty francs you are just allowed to have fun or to play with them. If you want to deflower one, that costs more - hundreds or a thousand francs, depending on the family’s social status. At the right price you can sometimes find this pleasure even in families that seem to be quite ‘comme il faut’ . You admire an elegant young girl at the theater, surrounded by her family in her box. The person next to you in the stalls notices your enthusiasm. He tells you that the lady is yours at quite a moderate price and offers to help by introducing you. The Neapolitans are a very practical lot indeed. They make money every way they can except by working. Work is a source of income that does not appeal to them. The big San Carlo theater has a large ballet which operates independently of the opera. Several hundred children of both sexes form part of the ballet and it is just a great center for prostitution.

The two little girls were both as expert as each other. They told me all sorts of things about pederasty and lesbianism in this city. They went in for the latter with each other and with girlfriends. They had watched specially arranged copulations ¾ among others, a woman having intercourse with a dog, a man with a duck whose throat he cut during the act (that was an Englishman too), pyramid coitus which combined several people. They had posed for obscene photographs.

They were very sensual but, oddly enough, the younger one was even more so than her sister - she had violent orgasms when she looked like someone in death-throes, and secreted copiously. She adored obscene talk, photographs and reading, and used her erotic talents enthusiastically. When I came to the house, her face beamed with joy. I remember the deeply heartbroken, unhappy look she had one day when, to save money, I said I would made do with just the older girl. When afterwards I came out of the bedroom after that session, I saw the younger girl sitting on a chair by the door listening, her face sallow with vexation, trembling all over with frustration. She was overjoyed the next time when it was her turn to be asked for. She started dancing.

Beam related that Edmund Wilson was confident that Lolita was inspired by “Confession Sexuelle d’un Russe du Sud”, which was gifted to Nabokov by Wilson in June of 1948. Wilson felt that he had an, although, indirect yet strong influence on Lolita. In a letter to Nabokov, Wilson wrote that "Confession Sexuelle d'un Russe du Sud" “no doubt inspired Lolita”. Even if Wilson’s claim can’t be proven, Beam wrote: “We know that Nabokov read the Ellis tale (i.e., "Confession Sexuelle d'un Russe du Sud") closely, because he referred to it twice, once in Speak, Memory and a second time, and in greater detail, when he translated and re-edited Speak, Memory as Drugiye Berega into Russian.

Our innocence seems to me now almost monstrous in light of various “sexual confessions” (to be found in Havelock Ellis and elsewhere), which involve tiny tots mating like mad. (Speak, Memory, 203)

Our innocence seems to me now almost monstrous in the light of various confessions dating from the same years and cited by Havelock Ellis, which speak of tiny tots of every imaginable sex, who practice every Graeco-Roman sin, constantly and everywhere, from Anglo-Saxon industrial centers to the Ukraine (from where an especially lascivious report by a landowner is available). (Drugie berega, 184.)

In addition to "Confession Sexuelle d'un Russe du Sud", Alexander Dolinin wrote in "Nabokov and Third-Rate Literature (On a Source of LOLITA)" that Valentin Samsonov’s “A Fairy-Tale Princess” may have been an additional source for Lolita.

The short story is about Oleg Prostov, an insatiable nympholept, who confessed: “I am convinced that only with a girl not older than fifteen I can experience delight and it is worth giving my life for.”

Subsequently, Oleg kidnaps and rapes Ira, a thirteen-year-old schoolgirl. Consequently: “Oleg is arrested and sentenced to long-term imprisonment for kidnapping." In prison he tells the narrator: "[...] that he is happy; Ira, meanwhile, is sad and dreams of meeting him again.”

Dolinin noted some possible references in Lolita to “A Fairy-Tale Princess”:

1. Oleg Sherva is listed as one of Lolita’s classmates
2. And referring to the list, Humbert states passionately: “[...] “Haze, Dolores” (she!) in its special bower of names, with its bodyguard of roses - a fairy princess between her two maids of honor.” (52)

Posted by Mo Ibrahim at 7:50 PM No comments: