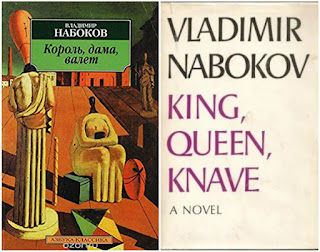 Plot Summary: Franz moves to Berlin to work in Dreyer's department store. Dreyer is Franz's wealthy relative, but that doesn't prevent Franz from having a love affair with Martha, Dryer’s beautiful wife.


1. During his train ride into Berlin, Franz “promised himself a lone treat that very night. He bared the shoulders of the woman that had just been sitting by the window, made a quick mental test (did blind Eros react? clumsy Eros did, unsticking its folds in the dark); then, keeping the splendid shoulders, changed the head, substituting for it the face of that seventeen-year-old maid who had vanished with a silver soup ladle almost as big as she before he had had time to declare his love” (18-19)

2. While scouting rooms to rent in Berlin:

Franz decided to act systematically. At the door of every third or fourth house a small notice board announced rooms for rent. He consulted a newly bought map of the city, checked once again the distance from Uncle’s villa and found he was close enough. A nice, new-looking house with a nice green door to which a white card was affixed attracted him, and he blithely rang the bell. Only after he had pressed it he noticed that the sign said “fresh paint”! But it was too late. A window opened on his right. A bob-haired, bare-shouldered young girl in a black slip, clutching a white kitten to her breast, peered out at Franz. His lips went dry in the arid blast. The girl was enchanting: a simple little seamstress, no doubt, but enchanting, and let us hope not too expensive. “Whom do you want?” she asked. Franz gulped, smiled foolishly, and said with quite unexpected impudence, by which he himself was at once embarrassed: “Maybe you, eh?” (59-60)


3. Two pictures of interest are mentioned in novel:
“A picture above the bed showed a naked girl leaning forward to wash her breasts in a misty pond.” (61)

And in the room that Franz eventually rents:

“Over the bed hung a picture. Puzzled, Franz stared at it. A bare-bosomed slave girl on sale was being leered at by three hesitant lechers. It was even more artistic than the bathing September nymph. She must have been in some other room—yes, of course, in the one with the stench.” (66)

The “big-nippled” slave girl is mentioned on three subsequent occasions until she is sold:

I. “They continued their planning when alone in the drab beloved little room, with the still unsold big-nippled slave girl above the bed and a brand-new expensive, unwanted tennis racket in its frame.” (225)

II. “The lewd bidders were appraising the big-nippled bronze-bangled slave girl for the last time.” (279)

III. “In fact, he himself could at any moment turn into a mousetrap, a mouse, an old couch, a slave girl led away by the highest bidder. Such magicians should be made emperors” (282)
Maurice Couturier wrote in Nabokov's Eros and the Poetics of Desire that the slave girl picture may have been an allusion to “The Bath of the Nymph” over the Bloom’s bed in Joyce’s Ulysses.

4. Lastly: "Once a young girl with bouncing breasts, in a short red frock, almost ran into [Franz] [...] and he fancied he recognized in her a janitor's daughter he had longed for many ages ago. (250)