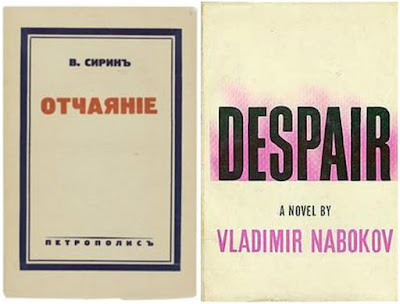 In Despair, Hermann Karlovich, a businessman and aspiring writer, meets Felix whom he opines is his doppelgänger. Plotting to collect insurance money, Hermann kills Felix, but his murder plot turns out to not be perfect.

Hermann, who is the narrator, shared: “At school I used, invariably, to get the lowest mark for Russian composition […] when rendering ‘in my own words’ the plot of Othello (which was, mind you, perfectly familiar to me) I made the Moor skeptical and Desdemona unfaithful.” 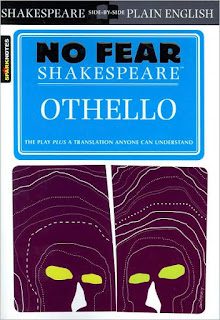 As a reminder, Shakespeare’s Othello is about an age-discrepant marriage between Othello, a North African general of the armies of Venice, and Desdemona, the "exquisitely beautiful" young daughter of Brabantio, a Venetian senator.

Shakespeare doesn't give the exact ages of Othello and Desdemona, but Othello is described by Iago, the villain of the play, as an "old black ram" while Desdemona is described as a "little white lamb [with] beautiful skin, whiter than snow and smooth as the finest marble."

Othello and Desdemona feared that, due to Othello's race and age, they wouldn't get the blessing of her father; thus, they eloped. Roderigo, a young jealous admirer of Desdemona informed her father, "but in the wee hours of the morning your daughter left your house [...] to go into the rough embrace of a lustful Moor."

Thus, it was assumed that Othello seduced Desdemona. It was unconscionable that the marriage was Desdemona’s idea. Desdemona's father even suggested that Othello used magic, trickery and/or drugs to seduce Desdemona. He said, "Are there magic spells that can lead young virgins astray? It's obvious to everyone that you you've tricked her, drugged her, or kidnapped her."

And Brabantio asked, "And you want me to believe that despite her young age and proper upbringing she fell in love with a man she'd be afraid to look at?" Iago opined, "To keep things hot, she'll need someone with a handsome face, someone close to her in age, someone who looks and acts like her."

After Desdemona convinced her father that it was her idea to marry Othello, he was forced to give their marriage his blessing; however, that didn't prevent Iago and Roderigo from doing everything within their power to end the age-discrepant marriage.

Brabantio, Roderigo and Iago, would have really been shocked by Desdemona’s assertiveness if Shakespeare would followed Hermann’s rendering and made Desdemona an “unfaithful” nymphet so soon after she lost her virginity to the Black general.