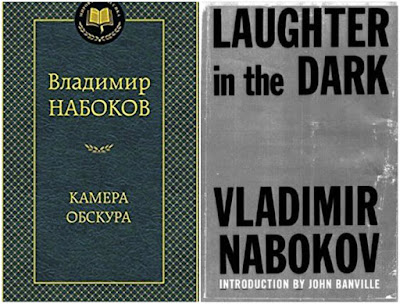 Plot Summary: Albinus, a Berlin based art critic, is captivated by Margot Peters, a sixteen-year-old cinema usher. After Albinus and Margot begin their sexual affair, Albinus introduces Margot to Axel Rex, a New York City based painter. Unbeknownst to Albinus, Margot and Rex were once an item. Subsequently, Margot and Rex reignite their age-gap love affair to the demise of Albinus.

1. Here is the opening sentence of Laughter in the Dark: “Once upon a time there lived in Berlin, Germany, a man called Albinus. He was a rich, respectable, happy; one day he abandoned his wife for the sake of a youthful mistress; he loved; was not loved; and his life ended in disaster.” (7)

3. Here are some details about Margot:

A. "When she was barely sixteen [...] she learned to dance, and now and then went with the shopgirl to the "Paradise" dance hall where elderly men made extremely frank proposals [...]" (27)

B. Margot was introduced to Rex via Frau Levandovsky. Margot initially declined, "Oh, there's no need for that yet. I'm only sixteen, aren't I? [...]" (31) "Fool," repeated Frau Levandovsky. "He is thirty, clean-shaven, distinguished, with a silk tie and a gold cigarette case holder." (31) Ultimately, Margot lost her virginity to Rex.

C. Margot was so distressed after Rex abandoned her that she spent the night with two Japanese "gentlemen". They gave her 350 marks for her services. (The nymphet only asked for 200.) (38)

D. Margot met "a fat old man with a nose like an overripe pear ". After he paid for her room until November and gave her enough money to purchase a fur coat, "she allowed him to stay for the night". However, he died shortly after they met. (38-39)

Subsequently, Margot met Albinus, eventually was re-introduced to Rex at one of Albinus' parties, where the chit and Rex reunited to the ultimate dismay of Albinus.

Laughter in the Dark was adapted into a 1969 film. Here's the IMDb plot summary: "A married middle-aged art critic and 16-year-old Margot begin an affair and develop a troublesome mutually parasitic relationship." Margot was played by 19-year-old Anna Karina.