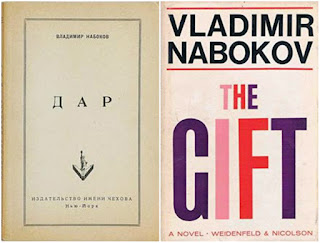 Plot Summary: After the Bolshevik Revolution, Fyodor Godunov-Cherdyntsev and his family immigrate to Berlin where he develops as a writer and develops a love affair with fellow émigré Zina Mertz.

1. In The Gift, after Fyodor would spend the greater part of the day on an indigo beach in the public garden, a book in his long tanned fingers” he would “go to give a lesson – to a businessman with sandy eyelashes, who looked at him with a dull gaze of malevolent perplexity as Fyodor unconcernedly read him Shakespeare; or to a schoolgirl in a black jumper, whom he sometimes felt like kissing on her bent yellowish nape”. (60)

2. When Fyodor’s mother extended him some spending money, he had contemplated procuring a young German prostitute: "‘I have a suggestion to make,’ said his mother gaily as they parted. ‘I have about seventy marks left which are quite useless to me, and you must eat better. I can’t look at you, you’re so thin. Here, take them.’ ‘Avec joie,’ he replied, instantly envisioning a year’s pass to the state library, milk chocolate and some mercenary young German girl whom, in his baser moments, he kept planning to get for himself.” (96)

4. Fyodor moved in with the Shchyogolevs after he eyed a “very short” dress on a “little table”. “Here’s my [step] daughter’s room,” [Shchyogolev] said, pointing to two doors on the left and right […] Fyodor passed his eyes over the table, a bowl of nuts, a sideboard…By the far window, near a bamboo table, stood a high-backed armchair: across its arms there lay in airy repose a gauze dress, pale bluish and very short”. (144)

5. Eventually, Fyodor secretly met with Zina Mertz, the step-daughter of Shchyogolev and the daughter of Marianna Nikolavna, and she shared with Fyodor that she met her fiancé “when she was sixteen, three years before, he being twelve years older than she”. (184)

6. And “Once, when [Boris Ivanovich] had noticed some written-up sheets of paper on Fyodor’s desk, he said, adopting a new heartfelt tone of voice: “Ah, if only I had a tick or two, what a novel I’d whip off! From real life. Imagine this kind of thing: an old dog—but still in his prime, fiery, thirsting for happiness—gets to know a widow, and she has a daughter, still quite a little girl—you know what I mean—when nothing is formed yet but already she has a way of walking that drives you out of your mind—A slip of a girl, very fair, pale, with blue under the eyes—and of course she doesn’t even look at the old goat. What to do? Well, not long thinking, he ups and marries the widow. Okay. They settle down the three of them. Here you can go on indefinitely—the temptation, the eternal torment, the itch, the mad hopes." (186)