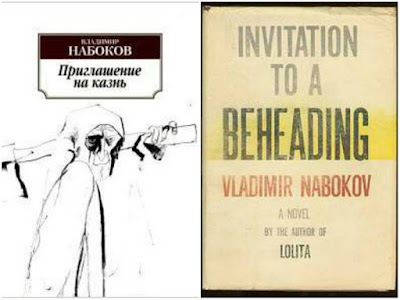 Here’s part of Amazon’s plot summary for Invitation to a Beheading: “[…] Invitation to a Beheading embodies a vision of a bizarre and irrational world. In an unnamed dream country, the young man Cincinnatus C. [a thirty-year-old teacher] is condemned to death by beheading for "gnostical turpitude," an imaginary crime that defies definition. Cincinnatus spends his last days in an absurd jail, where he is visited by chimerical jailers, an executioner who masquerades as a fellow prisoner, and by his in-laws, who lug their furniture with them into his cell. When Cincinnatus is led out to be executed, he simply wills his executioners out of existence: they disappear, along with the whole world they inhabit.”

1. The plot summary failed to mention Emmie, the “silky-blonde” twelve-year-old daughter of Rodrig Ivanovich, the prison director. (41) who would hide in Cincinnatus’ cell. At the abrupt end of her first visit, the nymphet: “[…] on the threshold, she abruptly stopped […] perhaps blowing a kiss, or perhaps concluding a pact of silence – looked over her shoulder at Cincinnatus [...]” (43)

2. Cincinnatus’ lawyer entered the cell “ruffled and sweaty” “I lost a cufflink,” he exclaimed, panting rapidly like a dog. “Must have – rushed against some – when I was with sweet little Emmie – she’s always full of mischief […]” (29)

3. Subsequently: “At one spot, where an unexpected and inexplicable sunbeam fell from above and glowed mistily as it broke on the eroded flagstones, Emmie, the director’s daughter, in a bright checkered frock and checkered socks—a mere child, but with the marble calves of a little ballerina—was bouncing a ball, rhythmically against the wall. She turned, brushing a blond lock from her cheek with the fourth and fifth fingers of her hand, and followed the brief little procession with her eyes. Rodion gave a playful jingle with his keys as he passed; the lawyer lightly stroked her glowing hair; but she was staring at Cincinnatus, who gave her a frightened smile. Upon reaching the next bend of the passage, all three glanced back […]” (36)

Couturier wrote in Nabokov's Eros and the Poetics of Desirethat Cincinnatus was “sexually aroused” by Emmie’s “marble calves of a little ballerina”. (178)

Cincinnatus stroked her warm head, trying to raise it. She snatched his fingers and began pressing them to her quick lips.

“What a snuggling pet you are,” said Cincinnatus drowsily. “That will do, enough now. Tell me …[when will I be executed]”

But she was seized by an outburst of childish boisterousness. The muscular child rolled Cincinnatus about like a puppy. “Stop it!” cried Cincinnatus. “Aren’t you ashamed of yourself?”

“Tomorrow,” she said suddenly, squeezing him and gazing at him between the eyes.

“No, I’ll rescue you,” Emmie said pensively (she was seated astride him).

“That’s very nice indeed,” said Cincinnatus. “Saviors from all sides! This ought to have happened sooner—I’m nearly insane. Please get off, you are heavy and hot.”

“We’ll run away and you’ll marry me.” “Maybe when you are a little older; only I already have one wife.”

5. Emmie “darted out” to Cincinnatus’ “firmly grasping him by the hand, dragged him [into the director’s apartment] after her. All her movements betrayed excitement, rapturous haste.” (173) “Pfui, you naughty child!” said the director’s wife to Emmie with a slight German accent.(174)

M’sieur Pierre, who was stirring his tea, demurely lowered his eyes. (174) [...] “Emmie sat down at the table […] and brushing her neighbor with her elbow. Her neighbor [M’sieur Pierre] continued to sip his tea, holding the spoon protruding from it between second and third fingers, but inconspicuously, reached under the table with his left hand. “Eek!” cried Emmie as she gave a ticklish start, without, however, taking her mouth from the melon.” (175)

6. Cincinnatus’ father was an “unknown transient” (16) who had impregnated Cecilia C., Cincinnatus’ mother “one night at the Ponds when she was still in her teens” (16). During a cell visit, Cincinnatus asked his mother to tell him the “legend” about his father. Cecilia implored: “It’s true, I don’t know who he was – a tramp, a fugitive, anything is possible…But why can’t you understand…yes, it was a holiday, it was dark in the park, and I was still a child., but that’s beside the point.” (136)