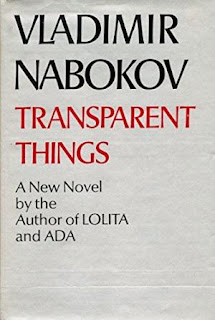 "Transparent Things revolves around the four visits of the hero--sullen, gawky Hugh Person--to Switzerland [...] As a young [sic] publisher, Hugh is sent to interview R., falls in love with Armande on the way, wrests her, after multiple humiliations, from a grinning Scandinavian and returns to NY with his bride [...] Eight years later--following a murder, a period of madness and a brief imprisonment--Hugh makes a lone sentimental journey to wheedle out his past [...]"

1. In addition to being a publisher, Hugh Person was a writer too. He had "an unfinished short story in a Russian copybook [...] parts of a philosophical essay in a blue cahier [...] and the loose sheets of a rudimentary novel under the title Faust in Moscow." (18) Hugh was unpublished except for a poem that was published in a college magazine. (22)

But forty-year-old Person "had courted a thirty-eight-year-old mother and her sixteen-year-old daughter but had been impotent with the first and not audacious enough with the second." (17)

3. Mr. R, a much older published writer took Julia Moore's virginity when she was thirteen. By the way, Julia was Mr. R's step-daughter. "[...] Julia, who according to Phil had been debauched at thirteen by R., right at the start of her mother's disastrous marriage." (35)

4. Mr. R's affair with his step-daughter lasted until she was eighteen, which was when he discovered that his wife and step-daughter were "having and affair with Christian Pines, son of the well-known cinema man who had directed the film Golden Windows (precariously based on the best of the author's novels)." (32)

5. Person had a one-night-stand with the eighteen-year-old Julia, who had a doll face, slanting eyes, "and topaz -teared earlobes" (34) in his upper-east side apartment after meeting her at a party in Manhattan. (35)

Interestingly, Armande and Julia were friends and "had both taught in the winter at a school for foreign ladies in the Tessin." (27)

5. Armande's "parents and aunts, the insatiable takers of cute pictures, believed in fact that a girl child of ten, the dream of a Lutwidgean, had the same right to total nudity as an infant." (40) Person had the pleasure of perusing the photo album that contained nude photos of Armande during her nymphet years.

The Lutwidgean reference was to Charles Lutwidge Dodgson whose pen name was Lewis Carroll. As mentioned previously, Carroll famously wrote Alice's Adventures in Wonderland, which Nabokov translated into Russian.

Alice's Adventures in Wonderland may have been inspired by Alice Liddell. Caroll took suggestive photographs of pre-teen Liddell, as well as other nymphets, and Morton Cohen alleged in Lewis Carroll: A Biography that Carroll desired to marry eleven-year-old Liddell.  (30-35)