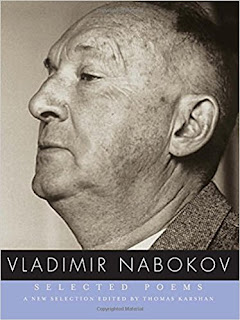 In the poem "Lilith", a nymphet leaves a man flabbergasted after she suddenly ends copulation:
I died. The sycamores and shutters
along the dusty street were teased
by torrid Aeolus.

I walked,
and fauns walked, and in every faun
god Pan I seemed to recognize:
Good. I must be in Paradise.

Shielding her face and to the sparkling sun
showing a russet armpit, in a doorway
there stood a naked little girl.
She had a water-lily in her curls
and was as graceful as a woman. Tenderly
her nipples bloomed, and I recalled
the springtime of my life on earth,
when through the alders on the river brink
so very closely I could watch
the miller’s youngest daughter as she stepped
out of the water, and she was all golden,
with a wet fleece between her legs.

And now, still wearing the same dress coat
that I had on when killed last night,
with a rake’s predatory twinkle,
toward my Lilith I advanced.
She turned upon me a green eye
over her shoulder, and my clothes
were set on fire and in a trice
dispersed like ashes.
In the room behind
one glimpsed a shaggy Greek divan,
on a small table wine, pomegranates,
and some lewd frescoes covering the wall.
With two cold fingers childishly
she took me by my emberhead [пламя – i.e., erect penis]:
“now come along with me,” she said.

Without inducement, without effort,
Just with the slowest of pert glee,
like wings she gradually opened
her pretty knees in front of me.
And how enticing, and how merry,
her upturned face! And with a wild
lunge of my loins I penetrated
into an unforgotten child.
Snake within snake, vessel in vessel,
smooth-fitting part, I moved in her,
through the ascending itch forefeeling
unutterable pleasure [восторг – i.e., approaching orgasm] stir.
But suddenly she lightly flinched,
retreated, drew her legs together,
and grasped a veil and twisted it
around herself up to the hips,
and full of strength, at half the distance
to rapture [блаженству - i.e., orgasm], I was left with nothing.
I hurtled forward. A strange wind
caused me to stagger. “Let me in!”
I shouted, noticing with horror
that I stood again outside in the dust
and that obscenely bleating youngsters
were staring at my pommeled lust [булаву – mace i.e., erect penis].
“Let me come in!” And the goat-hoofed,
copper-curled crowd increased. “Oh, let me in,”
I pleaded, “otherwise I shall go mad!”
The door stayed silent, and for all to see
writhing in agony I spilled my seed
and knew abruptly that I was in Hell.

The words in the brackets are from Maxim D. Shrayer's Russian Literature journal article "Nabokov's Sexography".

Nabokov shared in Poems and Problems that “Lilith” was composed “to amuse a friend.” And that: “Intelligent readers will abstain from examining this impersonal fantasy for any links with my later fiction.” (243)  However, Maurice Couturier revealed in Nabokov's Eros and the Poetics of Desire that different versions of last six lines of “Lilith” were used " [...] throughout Nabokov's novels which may suggest that he, as an author, was probably reenacting an event belonging to his own past or a fantasy he had nursed." (79)

In Pniniad, Marc Szeftel, whom many claim was the model for Nabokov's Pnin, shared an anecdote that was related to him by Gleb Struve, an associate of Nabokov:

“Struve tells about a private evening devoted to Nabokov's erotical (or even pornographical) poetry, read by him. Of these poems only “Lilith” has been published in N.'s 'Poems and Problems'...This reading happened when N. was not yet married...What was on young Nabokov's mind before he married Vera, I do not know. Probably, quite a few frivolous things, to expect from a very handsome, young Russian.”