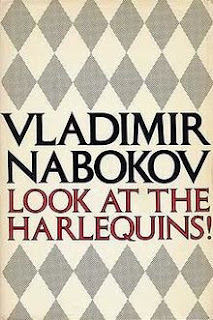 Richard Poirier wrote in a New York Times review of Look at the Harlequins!: “After Joyce with his “portrait” of Stephen, after Proust with his “remembrance” of Marcel, there are few reasons to be surprised […] by the complicated interplay between Vladimir Nabokov and the narrator of this, his 37th book. Vadim Vadimovitch is a Russian emigré writer and a mirror image or “double” of Nabokov as man and writer”.

1. Vadim and Iris, his future first wife, were sunbathing on the French Riviera when Vadim spotted a nymphet: “There was a child of ten or so cradling a large yellow beach ball in her bare arms. She seemed to be wearing nothing but a kind of frilly harness and a very short pleated skirt revealing her trim thighs. She was what in a later era amateurs were to call a ‘nymphet’.” As she caught my glance she gave me, over our sunny globe, a sweet lewd smile from under her auburn fringe.” (29)

Couturier wrote in Nabokov's Eros and the Poetics of Desire that Vadim is referring to Nabokov as the later era amateur. (73)

2. After Vadim moved in with Mr. and Mrs. Stepanov, he became attracted to Dolly, the Stepanov's eleven-year-old grand-daughter. Vadim wrote in his (fictional) autobiography: “Those were nice, nice interludes! [...] I had a box of chocolate-coated biscuits to supplement the zwiebacks and tempt my little visitor. The writing board was put aside and replaced by her folded limbs [...] she dangled one leg and bit her biscuit, to the ordinary questions one puts to a child; and then quite suddenly in the midst of our chat, she would wriggle out of my arms and make for the door as if somebody were summoning her”. (78)

Couturier wrote that Dolly “is evidently an avatar of Emmie in Invitation to a Beheading, and of Lolita herself, a true nymphet” and that Vadim “a farcical avatar of Nabokov, will wait for her to grow up before undertaking to make love to her.” (78)

3. Subsequently, Vadim became more and more attracted to Isabel, his twelve-year-old daughter. “One change, one gradational trend I must note, however. This was my growing awareness of her beauty. Scarcely a month after her arrival I was already at a loss to understand how she could have struck me as ‘plain.’” (168)

Vadim doesn't consummate with his biological daughter; however: “During his cohabitation with Bel, he is very happy and sexually aroused most of the time, but he only caresses her: 'Save for a few insignificant lapses – a few hot drops of overflowing tenderness, a gasp masked by a cough and that sort of stuff – my relations with her remained essentially innocent'” (173)

4. Vadim was invited by Mrs. King to an "impromptu soirée". (175). At the gathering were "only six people in a spacious parlor, not counting two painted girl-children in Tyrolean dress [...]" (176)

Subsequently: "[...] The two cold-thighed chessy-necked girleens were now engaged in a quarrelsome game as to who would sit on my left knee, that side of my lap where the honey was, trying to straddle Left Knee, warbling in Tyrolese and pushing each other off, and cousin Fay kept bending toward me and saying in a macabre accent: "Elles vous aiment tant! Finally I pinched and twisted the nearest buttock, and with a squeal they resumed their running around, like the eternal little pleasure-park train, brushing the brambles. (180)

Couturier noted that “that side of [his] lap where the honey was” was another poetic metaphor to avoid naming the real thing. (86)

5. Couturier wrote: "Dolly, whom he had fondled but not possessed at the time when she was a nymphet, reappears at this point in the story; she is now twenty-four. She claims she had 'always had a crush' on him when he mesmerized her on his lap, 'playing sweet Uncle Gasper'". (83)

"One day, she walks into his office at the university and challenges him to make love to her, emulating Lolita at the Enchanted Hunters: Smiling, she swept the examination books off the desk and perched upon it with her bare shins in my face. What might have promised the most refined ardors turned out to be the tritest scene in this memoir. I hastened to quench a thirst that had been burning a hole in the mixed metaphor of my life ever since I had fondled a quite different Dolly thirteen years earlier [when she was eleven]. The ultimate convulsion rocked the desk lamp, and from the class just across the corridor came a burst of applause at the end of Professor King’s last lecture of the season." (139–40)