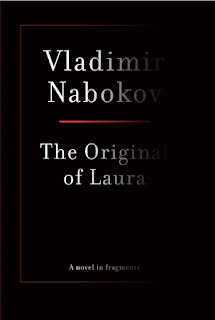 Before Nabokov's death in 1977, he instructed his wife to burn the unfinished first draft—handwritten on 138 index cards—of what would be his final novel. She did not, and now Nabokov's son, Dmitri, is releasing them to the world [...] It would be a mistake for readers to come to this expecting anything resembling a novel, though the few actual scenes here are unmistakably Nabokovian — a character named Hubert H. Hubert molesting a girl, a decaying old man's strained attempt at perfunctory sex with his younger wife. The story appears to be about a woman named Flora (spelled, once, as Flaura), who has Lolita-like moments in her childhood and is later the subject of a scandalous novel, Laura, written by a former lover. Mostly, this amounts to a peek inside the author's process and mindset as he neared death. Indeed, mortality, suicide, impotence, a disgust with the male human body—and an appreciation of the fit, young female body—figure prominently.

Because it’s an unfinished first draft, The Original of Laura can be difficult to read, but some of the themes of nympholepsy are clear. For example, Adam Lind, a photographer and the son of the painter Lev Linde, married Lanskaya, a ballerina. After Adam committed suicide, Lanskaya found an "elderly but still vigorous" lover in Hubert H. Hubert, who was deeply attracted to Flora, Lanskaya's "lovely" 12-year-old daughter.

Flora was "alone in the house with Mr. Hubert, who constantly "prowled" around her […] she did not dare to let her arms hang aimlessly lest her knuckles came into contact with some horrible part of that kindly but smelly and "pushing" old male." (57)

"In one scene, while Flora, with her dark blue eyes and silky blondish hair, was in bed "with a chest cold," (63) Hubert "brought his pet a thoughtful present: a miniature chess set" (65) but the game didn't last long because "[a]fter a few minutes of play Flora grew tired of it, put a rook in her mouth, ejected it [ ...] Then, with a father's sudden concern, he said, "I'm afraid you are chilly my love," and plunging a hand under the bedclothes from his vantage point at the footboard, he felt her shins. Flora uttered a yelp and then a few screams." (71)

Hubert never got his wish to be with Flora, but she "was barely fourteen when she lost her virginity". (77) And she had a lipstick lesbian fling with a “fun loving little Japanese [girl] who would twist her limbs into a pretzel”. (95)

By the time Flora was 24, she was "extravagantly slender," had "cup-sized breasts," and due to her beauty she "seemed a dozen years younger,"  i.e., Flora looked like a beautiful twelve-year-old. (15)

According to Couturier, The Original of Laura's Hubert H. Hubert is “an obvious replica of Humbert Humbert…He was the perfect nympholept, obviously, but contrary to Humbert, he never managed to become sexually intimate with his stepdaughter.” (91)

Couturier, Maurice. Nabokov's Eros and the Poetics of Desire.
Palgrave Macmillan, 2014. Kindle Edition.
Nabokov, Vladimir, and Dmitri Nabokov. The Original of Laura: Dying Is Fun.
Penguin Classics, 2009.
Posted by Mo Ibrahim at 7:38 AM