THE [SHORT] STORIES OF VLADIMIR NABOKOV 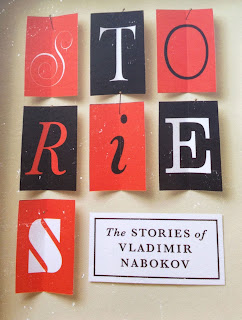 “Skazka” [“A Nursery Tale”] (1926)
Nabokov wrote “Skazka” [“A Nursery Tale”] in 1926 before it was published in Rul', a Berlin emigre newspaper that was founded by his father. When Nabokov translated the story before it was published in Details of a Sunset (1976) and Playboy (1974), he aggressively titled it “A Nursery Tale” and noted in Tyrants Destroyed and Other Stories that when he was translating the story he was “eerily startled to meet a somewhat decrepit but unmistakable Humbert escorting his nymphet in the story he wrote almost half a century ago”.

In “A Nursery Tale”, on his ride to work, Erwin habitually gazed through the tram's window and picked young girls for his imaginary harem. Eventually, Erwin was offered the opportunity to have his dreams come true after he met Frau Monde, a female Devil, who promised Erwin that he could have all the girls he wanted in “a villa with a walled garden" upon "cushions and rugs” but that it was “essential and final” that he select an odd number of girls between noon and midnight. Consequently, Erwin started collecting slave girls. Here's a partial yet relevant list:

1.    A maiden in a white dress with chestnut hair and palish lips who was playing with her “fat shaggy pup”
2.    “[T]wo young ladies-sisters, or even twins...Both were small and slim...with saucy eyes and painted lips.” Erwin referred to the Twins as “Gay, painted, young things.”
3.    And “[a] child of fourteen or so in a low-cut black party dress.” She was walking with a tall elderly man who was a “famous poet, a senile swan, living all alone in a distant suburb.”

Couturier wrote that Erwin, who was Nabokov's first nympholept, was so blinded by his desire for his first nymphet that it prevented him from the thirteen other young women whom he could have enjoyed.

“The Fight"
In “The Fight”, a writer sunbathing on a German beach is intrigued by Mr. Kraus. The writer discovered that Mr. Kraus owned a tavern where he was assisted by Emma - “a young girl in a checkered dress, fair-haired, with pointed pink elbows”.

Emma’s lover was an electrician who had a “malevolent wrinkle beside his mouth”. The writer narrated that what he liked the most about Emma, with her “small birdlike face” and “vapid” and “tender eyes” was the way that she looked at her lover “as he lazily leaned on the bar.” After Emma’s father and her lover got into a brawl, the writer couldn’t resist consoling the young girl by stroking and kissing her kitchen scented fair hair.

In “Terror”, the poet’s mistress is described as a “naive little maiden” with “unassuming prettiness, gaiety, friendliness”. Their affair lasted almost three years until the poet departed by train only to have to return to her bedside and consequently save himself from “insanity.

In “Solus Rex” “Prince Fig enjoyed a kind of smutty popularity [...] The more lewdly Fig romped, the louder folks guffawed [...] A characteristic detail: one day when the prince, passing on horseback, a cigar between his teeth, through a backwoodsy hamlet, noticed a comely little girl to whom he offered a ride, and notwithstanding her parents’ horror [...] swept her away [...] the child returned after an hour’s absence, holding a hundred-krun note in one hand, and, in the other, a fledgling that had fallen out of its nest in a desolate grove where she had picked it up on her way back to the village.”

In “The Aurelian”, Paul Pilgram, a “flabby elderly man”, had a habit of ordering a drink and filling his pipe after entering the town’s “small bar”. And “[i]f the bartender’s daughter, a pretty freckled girl in a polka-dotted frock, happened to pass close enough, he had a go at her elusive hip, and, whether the slap succeeded or not, his gloomy expression never changed, although the veins on his temple grew purple.”

Early in “A Dashing Fellow” the protagonist asked, “What is better: the experience of a sexy thirty-year-old brunette, or the silly young bloom of a bright curled romp?” But by the end of the short story he exclaimed, “That old bitch. No, we like only small blonds - remember that once for all.”

Nabokov wrote in A Russian Beauty and Other Stories that “A Dashing Fellow” was rejected by Rul’ (Berlin) and Poslednie Novosti (Paris) for being “improper and brutal” before it was published in Segodnya (Riga) and in the December 1971 issue of Playboy.

In “Lips to Lips”, Ilya Borisovich, a naive aspiring novelist, is writing a novel in which “elderly” Dolinin meets Irina,  “a girl in black” with a “supple young body”, at the theater.

After the move to Dolinin’s flat, Irina exclaims, “Take me, take my purity, take my torment [...] because I love you.”

Commenting on the manuscript: “I suppose he’ll deflower her,” mused Euphratski “an émigré journalist”.

And the narrator opines: One of the many issues with Ilya’s novel is that he too frequently uses the adjective ‘“young’ (feminine gender), replacing it here and there by ‘youthful’”.

In “Music”, Victor noticed his estranged wife in the audience at the music hall. He reminisced about the time they were “talking about some trifle” when she interjected, “‘Let’s separate for a while. We can’t go on like this.’ The neighbors’ little daughter burst into the room to show her kitten (the sole survivor of a litter that had been drowned.)" Victor’s wife confessed: “The first time [that she had cheated on him] had been in the park, then at his place.”

I was ripped about including “Music”, but my gut tells me that “kitten” is a Nabokovian sexual innuendo\pun.

An excerpt from “Perfection” reads: “During those first warm days everything seemed beautiful and touching: the leggy little girls playing hopscotch on the sidewalk, the old men on the benches, the green confetti that sumptuous lindens scattered every time the air stretched its invisible limbs.”

The old men on the benches reminded me of the protagonist in The Enchanter who “[...] seated himself on a bench in a city park” where he ogled his nymphet.

Count Konstantin Godunov-Cherdyntsev of “The Circle” “was spending the summer at Leshino, his estate in the Government of St. Petersburg, with his young wife (at forty he was twice as old as she).”

“THAT IN ALLEPO ONCE…”

Lastly, the poet of “THAT IN ALLEPO ONCE…” had a “much younger” wife but “[...] not as much younger as was Nathalie of the lovely bare shoulders and long earrings in relation to swarthy Pushkin.”

After he “held her slender young hips (she was combing her soft hair and tossing her head back with every stroke)” she informed him, “I’ve been lying to you, dear [...] Ya Igunia. I stayed for several nights in Montpellier with a brute of a man I met on the train. I did not want it at all. He sold hair lotions.”
Posted by Mo Ibrahim at 7:43 AM