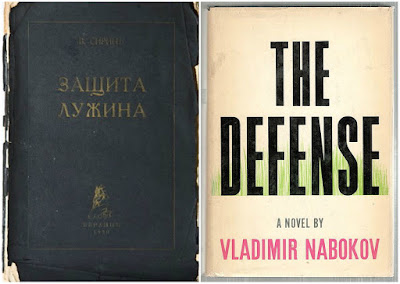 Plot Summary: With the help of Valentinov, his manipulative manager, Aleksandr Ivanovich Luzhin develops from a chess prodigy to a Grandmaster but becomes mentally unstable along the way.

1. Luzhin’s wife had never met anyone to compare him to but: “Her memory contained a modest dimly lit gallery with a sequence of all the people who had in any way caught her fancy. Here were her school reminiscences — the girls' school in St. Petersburg, with an unusual bit of ivy on its frontage that ran along a short, dusty, tramless street, and the geography teacher — who also taught in a boys' school — a large-eyed man with a very white forehead and tousled hair […] in love — they said — with one of the upper-form girls, a niece of the white-haired, blue-eyed headmistress”.

Thus, not only did her geography teacher, who was further described “as an extraordinarily amusing person”, catch “her fancy” but it was rumored that he was in love with one of the “upper-form” nymphets as well.

2. Valentinov requests that Luzhin be an extra in a film:

“I wrote the script. Imagine, dear boy, a young girl, beautiful and passionate, in the compartment of an express train. At one of the stations a young man gets in. From a good family. Night descends on the train. She falls asleep and in her sleep spreads her limbs. A glorious young creature. The young man […] begins literally to lose his head. In a kind of trance he hurls himself upon her.' […] 'He feels her perfume, her lace underwear, her glorious young body... She wakes up, throws him off, calls out' […] 'the conductor and some passengers run in. […] The point is that from the very first moment — there, in the express — she has fallen in love with him, is seething with passion, and he, because of her — you see, that's where the conflict is — because of her he is being condemned to hard labor.”